Imagine going through your daily routine without your mind thinking about the same thing over and over again. Neurofeedback therapy can be a method to quiet the mental chatter of OCD and help restore your life to normal. As you will learn, neurofeedback therapy has been successfully helping people overcome debilitating OCD, regain energy, and allow you to function at your highest level.

The Pressure of Modern Society

In modern society, we receive a daily overload of information brought to us by countless different channels like social media. Adults, teenagers, and even children have ever-expanding agendas and feel the pressure to
keep up with the Joneses. It comes as no surprise that so many people struggle with mental problems and disorders from all the stresses we face each day. All this stress and anxiety leads to mental disorders of which the obsessive-compulsive disorder is one.

The Struggle of People with OCD 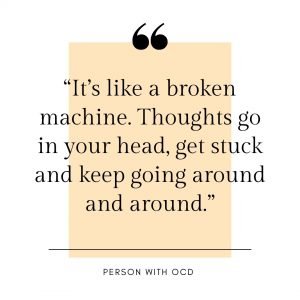 A person with OCD described it as, “For me, it’s an ever-present nagging feeling that something is just ‘not right.’ I can never really, truly, ‘make it right.’ I have to learn to live with the all-consuming feeling of mental discomfort.”

What is Neurofeedback Therapy?

Neurofeedback therapy is a reward-based training to change the activity of your brain. No medication is used during neurofeedback therapy, and it is 100% safe. EEG sensors will monitor your brainwaves during all kinds of activities. When the brain operates optimally, positive feedback will be given to promote these brainwaves. But if the brain is showing non-optimal activity, you will receive “negative” feedback. Your brain can learn from this feedback to construct more effective brain neuropathways. These newly formed brain pathways will help to mitigate numerous symptoms. If you want to find out more check out this article- What Is Neurofeedback?

How does Neurofeedback therapy works?

The first step is to assess the brain with a brain map. A brain map uses sensors on your scalp and ears to measure brainwave activity. The brain map gives us a baseline for the function of your brain.

The doctor will explain everything you need to know about the result of the brain map. Together with the doctor, you will set up a treatment plan.

During the treatment, your brainwaves will be monitored. The process can be as simple as watching a movie. As long as the preferred brain waves are present, the screen stays bright, but the screen darkens when unwanted brain waves are active. By positive reinforcement, the client learns to adjust and reshape its brainwave activity. The changes in the brain will help to reduce obsessive thoughts, fear, and anxiety.

What Does Research Say About Neurofeedback Therapy and OCD?

A study performed at Yale University showed great promise with neurofeedback therapy and OCD. The researchers found that a person battling OCD can train their brain to reduce symptoms of the disorder. The authors of the study also noted that neurofeedback training might help understand the unlying causes of this disorder.

Another study looked at 36 people who had drug-resistant OCD to see if neurofeedback therapy would help symptoms. Thirty-three of the 36 research subjects showed a significant reduction in OCD symptoms. A follow up with the individuals of this study after 26 months was conducted, and a majority maintained the improvements.

How Can Neurofeedback Therapy Help People with OCD?

When you complete the neurofeedback therapy, your brain will be less emotionally reactive. It will give you more control over your emotions, feelings, and behavior. In turn, it will reduce and finally eliminate the symptoms of your obsessive-compulsive disorder, bringing you peace of mind and the freedom to choose your response. Moreover, neurofeedback therapy is free of any side-effect risks and completely painless. Your brain will learn to perform better after just a few treatments and permanently change after receiving the full treatment.

You can schedule a free, no-obligation consultation with the doctor online or call our office at 303-794-1737. Let us help you live a better life without the anxiety and symptoms of OCD. Contact us today!